You see the moon

Sinking into the deep black sea

A mourning look upon your face

As you reflect on your life.

You never raise your head

But then as you look up once again,

Looking at the sun on the horizon,

And your mind becomes diamond clear.

You raise your head to its tallest point,

And puff out your chest,

And a smile lingers on your face,

As a new beginning starts,

I watched it decrease the distance between us,

As it reached my toes, I saw myself in a mirror,

And realized that instead of two, I saw one.

As the past replayed all but in a second,

Knew it was just the past and the future different,

But chains refused to unshackle.

A dangerous volcano built up inside,

A chemical reaction of emotions,

A flowing tide reached its peak.

Like a surgeon searching for the bullet inside the wound,

A scalpel running itself across, wounding to heal,

You came into my life,

Stirring the depths of whatever remained inside.

My heart was conflicted, still replaying the tape

Called the past. The present and future never existed.

Troubled and I didn’t know what to do.

Aching but I didn’t want to remedy.

Hurting but I didn’t want to forget.

They run through my mind

Scampering from corner to corner

Fueling the embers of ambition before they die out,

Poking me till I am annoyed by my aspirations.

They break my heart as if it is delicate glass,

Or sometimes they make my day, sending beaming smiles my way,

They hurt me or please me, however they please,

But life plays a larger role in this result more than we believe.

Another day passes by,

Another puzzle piece fits in,

As the year passes by,

At the end, only a blur

In the thick of it,

Immersed in the seconds,

The date ticked back to 1,

And the formation of

Poem written as a response to Mindlovemisery’s Menagerie’s Sunday Prompt.

Hi guys! I hope all of you are having a wonderful holiday season and that 2020 despite all of its challenges, tribulations, and changes proved to be a wonderful and enlightening year for you all. 🙂 From that point on, I also hope that 2021 is a great year for every single one of you, for those of you reading this or not reading this, and for everyone else in between. I know I have not been really active for the last few months, but I am trying to change that and will hopefully be more active in the coming year. That is one of my goals for the New Year. What are some of your goals for the New Year?

I thought it would take longer

To open the stone heart

But all it took was one smile,

To from a crack,

And all the pain came

Trapped in a box,

A heavy fist punches the air,

Tearing whatever comes in the way.

The canvas. As I turn to look

And a knife hurling through my hea—

Suddenly the screen shatters, as I sit up

Covering half my face upon my bed

Breaking out in a cold sweat with flowing tears

The only visual symbolization of my fears.

Shining bright in the expanse,

In a world so dark.

I wonder when a star

Will shine its light on me

So I too can step out of this darkness.

as a reflective illusion shatters,

and each slides off into each’s own path.

Comfort reached the highest of pleasures.

Waiting for pleasant words to symphonize,

But as night dawned,

And the chandelier lit,

The podium revealed in all their histrionic ways:

Written as a response to Sammi Cox’s Weekend Writing Prompt #181.

Trapped in a dark cell,

No way to escape.

He is never going to, they all said

Not after the things he has done, they said,

And threw him into a cell he could never get out of.

Forced inside, he began to think.

All he ever wanted was a place to belong to,

To do something good for the world,

Impact the world in ways no one ever could.

Where did he go wrong?

Was it when he fell to his evil thoughts and temptations?

When he failed to listen to the warnings and condolences

Of the people that cared about him?

When he realized no one was there for him in the first place?

Was it now too late to change? Probably was, after this many years.

Closing his eyes, he prepared for death,

The only thing that could now bring him solace,

Confined in this cell.

But, a light still gleamed.

As he closed his eyes, he heard voices.

Full of warmth and love, saying,

“True change begins from within.”

He remembered those voices,

two people who had cared for him more than anyone.

Light and hope began to clear the shell and doubt

He remembered his promise and his purpose.

He stood up, opened his cell and looked out.

In the lone path that he had seen before,

Shocked, he looked at the two paths,

“No matter how old you are,

It is never too late to change”.

Credit is to Google Images and BrainyQuote for the images. 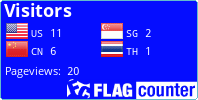 Back to top
princessshoujo.wordpress.com/
Tales for Life

Some stories just want to be told: healing and wholeness in everyday life

The Road to Engineering

You are not here by accident, there is a purpose for you being here.

the easiest way to discover your next favorite blog

Yuugen(幽玄) -- an awareness of the universe that triggers an emotional response too deep for words.

A Little Blog of Books

Book reviews and other literary-related musings

The sage of Baltimore lives on

A weaver of poetic words.

...Tis nothing more than a labour of love...